This page was generated from /builds/synsense/rockpool/docs/tutorials/wavesense_training.ipynb. Interactive online version:

In this notebook we will demonstrate how to create and train a WaveSense network as described in https://arxiv.org/pdf/2111.01456.pdf.

The key feature of this model is its temporal convolution layer which is inspired by the famous WaveNet architecture from Google: https://arxiv.org/pdf/1609.03499.pdf and https://deepmind.com/blog/article/wavenet-generative-model-raw-audio

There are additional parts to the model worth mentioning. The dilated connection happens in a computational block called “WaveBlock”. Moreover, the WaveBlock uses a residual connection to connect to the next block and also a skip connection directly to the readout layer.

The WaveSense network stacks multiple such WaveBlocks and adds a two layered readout:

Now, that the model is introduced, let’s get started and define the task.

For demonstation purposes, we want to train the WaveSense model on a toy task which is representative to the tasks it is meant to be applied. We chose the temporal version of logical XOR as it easy but still requires temporal memory, which is the key problem solved by WaveSense.

We create a TemporalXOR task of length T_total. The created input spike trains contains two stimuli containing num_channels neurons of duration T_stim. Between the presentation of the two stimuli is a certain temporal delay which is randomized around T_delay +- T_randomize.

The supervision signal is equal to logical XOR(stim_0, stim_1):

The problem which has to be solved is two-fold.

Now that the taks is defined and we created a dataloader, let’s visualize the data. 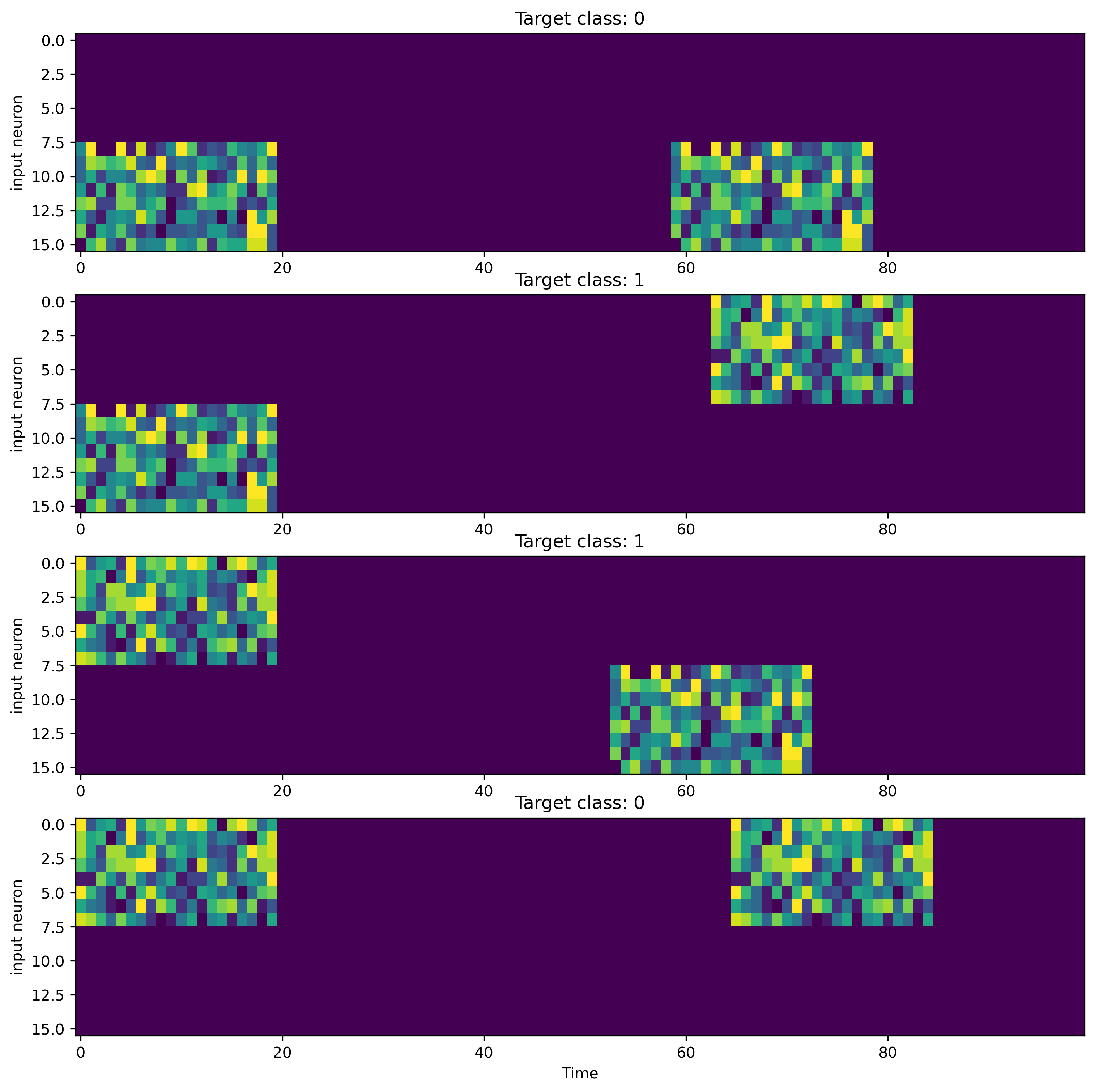 Finally, WaveSense can low-pass the output of the readout with an exponential kernel (time constant tau_lp). This is not strictly necessary but can help to smooth the gradients.

We can also choose which implementation of the LIF neuron WaveSense should use. The options are:

Here, we use LIFTorch as the most standard implementation of the LIF dynamics.

We use CrossEntropyLoss as TemporalXOR is a classification task and make use of the Adam optimizer.

We train this model on the TemporalXOR task for 300 epochs. It is worth noting that we apply CrossEntropyLoss only on the last timestep of the output of the model. We do that because we know that the model had the possibility to integrate enough information about the task at the last time step.

We can visualize the loss and the accuracy over epochs.

It seems that the model has learned the task successfully. But to make sure, let’s visualize the input, and output of the last batch.

We can also visualize the activity of each layer in WaveSense by accessing the record dict returned by rockpool on each forward path. We can access the state of each layer (synaptic current and membrane potential) or the spiking output.

Let’s take a look at the spiking output. 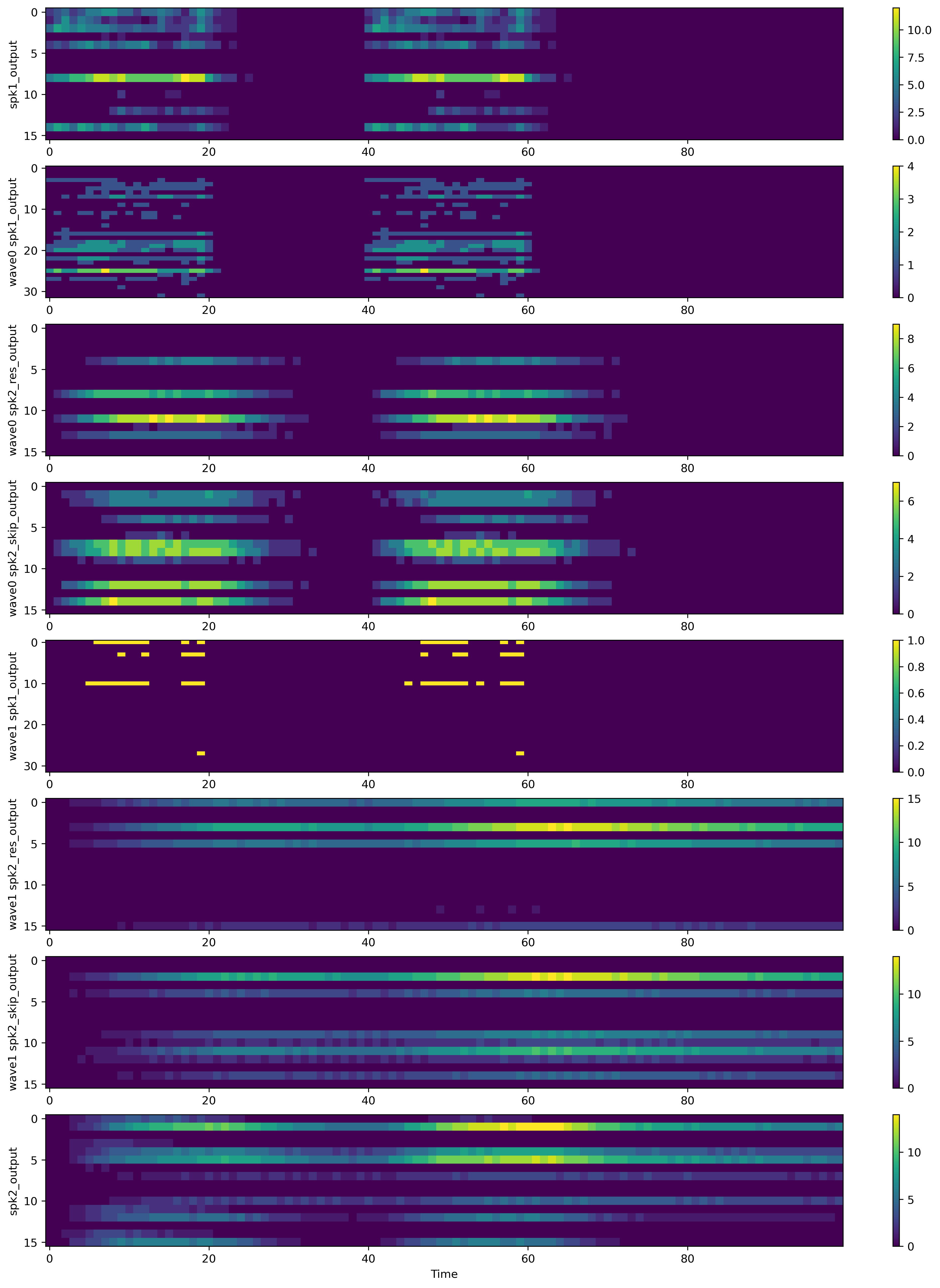 What we can see here is that the first layers (including the first WaveBlock) respond quickly to the stimuli which is expected as the time constants of those layers are short.

The second WaveBlock has the only long time constant in the network and is able to maintain an active state for the whole delay period. This reflects the memory in the network and can be utilized by the readout layer (the last layer).

We can save the model to json format using model.save(path) and load it again after initialization with model.load(path).